In 2013 the Mama Sita food company signed a contract with Philpost for the issuance of stamps bearing the image of founder Teresita Reyes up to 2017. Many collectors complained and asked why did the post office allow commercial entities to appear in our stamps. The first set appeared that year. Again, grumbling from collectors were heard about the awful design of the souvenir sheet, (S/S) particularly the perforations for two "ghost" stamps that amounted to P10 each, making the S/S cost P30. "The extra P20 is twice the amount of the P10 pictured in the S/S," they asked. "What for?"

The answer: Because the Post Office needed money, that's why it is accepting commercial products to appear in our stamps. A minimum amount of stamps that must be bought by the proponent was required and established, even before the Mama Sita stamps. More about this later.

Majority of people does not know that the Bureau of Posts was created in 1922, when the Philippines, under American Occupation, joined the Universal Postal Union as a "sovereign" entity. The Manila Central Post Office building in Liwasang Bonifacio was finished in 1926 and became the headquarters of the Bureau of Posts. The building was destroyed during the battle to liberate Manila from the Japanese in February 1945 and reopened on 1945 April 16 even as other parts of the building were undergoing restoration. Philately was strong in pre-war and post-war years; it did not abate during the Japanese Occupation, when the Philippines' first ever souvenir sheet was printed in 1943 to celebrate the country's "independence" from American rule.
Stamp shops proliferated in Manila and neighboring cities and even distant provinces. Many families became rich through the stamp trade; they bought cars and big houses, some established branches and the dealers kept churning many variations of First Day Covers (FDCs) by designing for each stamp different cachets on envelopes they embossed by silk-screen printing. Thus, a 5 centavos stamp was placed on envelopes of various designs and sold for, say, 50 centavos. Thousand were made by each dealer. And what remains to the heirs now are just cherry-on-top windfall items whose companions had already recovered the cost of production and made huge profits all around. 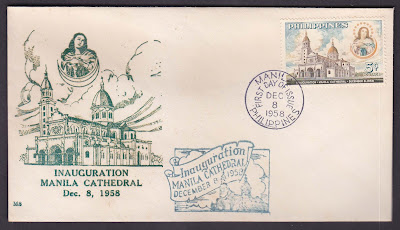 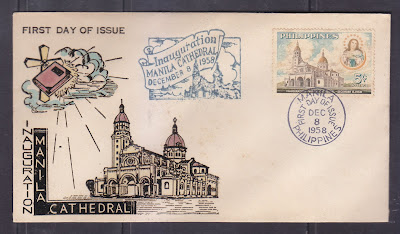 Samples of embossed FDCs made for the stamp commemorating the
inauguration of the Manila Cathedral in 1958. Many variations were


made, as much as the market can bear.

Then the People Power revolution ousted President Marcos in 1986 and loosened the government's hold on the Post Office, temporarily. "With the overhaul of the Philippine bureaucracy in 1987, the Bureau of Post was renamed the Postal Service Office (PSO) by the virtue of Executive Order No. 125 issued by then-President Corazon Aquino on April 13, 1987. It was also that order which placed PSO under the Department of Transportation and Communications(DOTC). On April 2, 1992, by virtue of the Republic Act No.7354 issued by then-President Fidel V. Ramos, PSO became a government owned and controlled corporation named as the Philippine Postal Corporation of more commonly known today as PHLPost."

Under Martial Rule -- from 1972 Sept. 21 to 1986 Feb. 25 -- the Post Office was placed under behest orders to sometimes print "special" stamps. Of particular interest is the 1981 Justice Fred Ruiz Castro issue, of which 2,000,000 copies were printed. It made the Guinness Book of World Records (about unusual facts) asks why the 67th birthday of a Supreme Court was being made delible on a Philippine stamp. The answer that tickled rebellious hearts was, "So that we can spit on his back." And there were bundles of Ferdinand and Imelda Marcos stamps, even before Martial Law was declared.

Last year, in 2017, President Duterte asked the Philpost to issue the Marcos Birthday Centenary stamp, following the request of Bongbong Marcos and family, after the dictator was hurriedly buried in the Libingan ng Bayani. Public money shouldered the cost. When no Marcos stamps were sent to the northern provinces, busloads of people from Ilocos Norte traveled to the Manila Central Post Office and bought sheets and sheets of the stamp. The stock FDCs, whose production (since 2008) was limited to 400 copies, was quickly depleted. Apparently there was no special order from Malacanang to make more than the usual number of FDCs, thus high officials' ignorance of the philatelic process somewhat save a bit of the public fund from celebrating a tyrant's memory. Dead and still stealing!

Commemorative stamps used to be printed in the hundreds of thousands, with the definitive issues printed in several millions (usually smaller in size and used mainly as postage). The fluctuation in printing was evident by 1998, when President Estrada was elected. A set of commemorative stamps for his inauguration was printed, at 200,000 each for each value. The set was sold on November 10.

Then the next single after the Mapa High School stamps suffered an abrupt decline in volume; only 50,000 copies of the 1998 University of Baguio stamp were printed. The steep drop went unnoticed by both collectors and Post Office employees, but the impact would be felt year later, when some collectors went searching for this stamp to fill the hole in their album.

The decline in demand not only forced the Post Office to reduce the number of stamps, S/S and sheetlets to be printed, it also led to the reduction of the FDCs, from a healthy 2,000 down to an erratic 400 pieces. If the stamp is thematic -- about animals, fish, ships, flowers -- all 400 were quickly snapped up; if the topic is humdrum, many are left over. To save further, the Post Office has decided that FDCs are to be made by request: The buyer who wants FDCs will have to buy the stamp and envelopes first, then go upstairs to have an emplotee affix the stamp and postmark the envelope. A very tedious process that only avid cover collectors will
Posted by William Pogi Chua at 11:15 PM