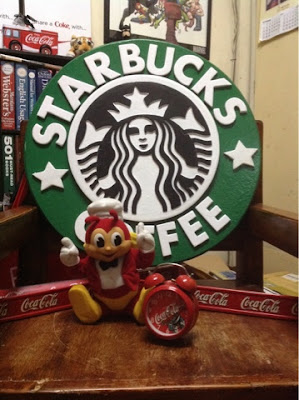 The lack of light, in the darkness of false dawn, sometimes brings stressful thoughts. Once, maybe in the break of a dream, I lay still in bed, while my mind prodded at the fact that I had occupied space in this particularly minuscule point of the planet, in a spiral galaxy in an unfathomable universe. Not only space, but also lots of time. "Don't attend reunions," my mind said, "you will look old to your classmates."

I imagined my classmates, all rich and healthy and young, wondering why I showed up at all, all wrinkled, hair gone, a girl assisting my walk so I don't fall down. Jolted by the thought, I became fully awake and I realized that time had not stopped for them, either. A few of them are even older than I am, most younger by a year or two, and the rest as old if not as decrepit as I. I count four dead in our batch, one recently killed in a traffic mishap.

Twenty years ago, when I turned 40, death has ceased to be a stranger to me. In my newspaper years (1994-2004) one of our young reporters died when he dropped a bag containing a loaded gun, which discharged one soft-nosed bullet into his belly. A desk colleague, a renowned and feared columnist, was shot by an Ipit-Gang member in the back of the head, the bullet exiting from his eye. This horrid image, his body slumped at the back of an abandoned taxi in Barangay Sauyo, was on TV for a few days. Camera crews from different stations appeared in our office, disturbing our work from time to time. I was even interviewed on radio about the killing. A TV production on the life of Danny Hernandez, played by Joel de la Torre, was rushed through prime time within a week. I saw many discrepancies in the film's details and I shrugged. By that time I got used to the constant inaccuracies of newspapers and TV programs. Everything is fiction, including details of our lives and deaths. The only truth about death is you will not be seen above ground anymore. Your enemies will no longer wish you misfortune. Your friends will take a little longer to forget you. (Where are those who declared their forever love for Michael Jackson and Whitney Houston? They have shifted to Glen Frey and other old stars who novaed out.) And time no longer counts, as far as the dead are concerned. Whether they rolled in money or just got along,  it did not matter too. It did not matter even in life, but we are too stupid now to think it does. The deathbed has a clarifying effect, if the dying is not hopelessly clueless, like, "Who's taking care of the store when you are all gathered here?"

While I still can compute, I'll prepare my facts for an imaginary reunion with former classmates who are in the vicinity of the six-decade mark. At your 60th birthday you have spent 365.25 x 60 = 21,195 days here. The number of your days, if converted to pesos, is equivalent to a cheap version of an iPhone. Not lack of money or surfeit of wealth will define your short stay on Earth. What then? I'm not intelligent, so I'll borrow from a movie, "The Bucket List," for an evaluation of life. According to a segment of that film, two questions are asked of deceased Egyptians that will determine whether they enter heaven or not. First question, "Have you found joy in your life?" Sort of a bonus question wherein a yes or no does not detract from your chances of admission to the ancient Egyptian heaven. However, the second question seems to bring a waft of very hot air: "Has your life brought joy to others?" I believe there are more souls outside heaven than inside. I can see myself installing a 10-hp air conditioner in a small room in Hades, where I play poker with pedophilic archbishops, many politicians, and all televangelists, while sexy starlets sit on my lap as I add a wee bit to the temperature with my cigarette smoke. A consistent life above and below, how says the jury?

In its five billion years of existence, add or take a week or two, the Earth, 500 million years ago, became so verdant and peaceful. Then, just 100,000 years ago, a fraction of a blink of the cosmic eye, the plague of modern humans arrived: so destructive, so inconsiderate, so lustful and greedy. And I belong to the species, devouring chopped pieces of chickens, pigs, cows, even rare tigers and lions whose lives are worth more than villages of brutal humanoids. For 60 years I have coasted along with our particular herd, trying not to spend my life in exchange for money, but for something tangible, something that will leave a mark here that says, "I was here (and pogi for life)." Making marks requires loads of talent: to write an excellent book, to sculpt a masterpiece, to paint a vision, to construct a breathtaking edifice, all to bring joy to others. Then others will remember you, if that matters at all. By what you contribute to others will you leave your mark, and become one of the immortals. And most of the immortals, whose names have outlived false gods of many nations, did not even reach 60. Just look at the roll of dead poets and writers, singers and composers, movie stars and Emmy awardees, painters, sportsmen and even chefs.

I am trying to unclog my life. I'm surprised that I have 1,418 Facebook friends, of which about only 20 are really part of my life -- relatives, friends more-or-less, and housemates. I love the four dogs in the garage, about 10 cats inside the house, but they don't have Facebook accounts; besides, we are counting humans, not whom I hold dear. I have made five real friends in my life (two have gone before me); it could been more, but time has a way of making people drift apart until they become strangers again. I deleted those friends-turned-strangers from my list, and I still have 1,418 left. I'm more comfortable with collectors, artists, comics and stamp dealers, chess players, bookworms, because we are separated by the anonymity that characterize cyberspace. They have not been classmates remembered or forgotten, colleagues whom you learned had harbored well-kept ill-feelings, girlfriends and lovers whose relationships with me became sour, awkward, tossed to the garbage pail of memories which make us cringe. I should feel lighter (I have deleted Viber accounts too); however, I feel the burden of age.

It is the body that acknowledges the effect of age -- teeth leave their companions, the pee in the bladder takes the long and winding road; the butter, fats and cholesterols we have accumulated through the years harden the arteries to the heart, still faithfully pumping lifeblood despite our abuses. The mind has no clock: think 17, and it retrieves my first kiss and believes the event happened only yesterday. If you deny your parents and friends have passed away, then they are alive, even appearing in unrequisitioned dreams. My mind believes it can make my right hand strum the guitar, bypassing the fact of disability. My brain is a pulpy bulb of low wattage, blinking some useless information I have culled from forgotten sources.

Colleagues who withheld their anger at me remind me of William Shatner, who played 60's Star Trek Captain Kirk, and was said to be self-centered. He recalled calling a former TV colleague, to keep in touch, and was shocked to hear him say, "But we hated you."

And how I remember Christopher Reeve, who played the role of Superman, the strongest superhero in the universe, being interviewed on TV by Larry King. This was about 10 years after he fell from a horse he was riding, severing the very fine thread in his spinal cord that controls almost all bodily functions, including breathing. There he was, full of memories when he had mighty powers, when he could carry Lois Lane and fly up to the clouds with her, now showing Larry King the result of massive and costly therapy -- he could now slightly, barely perceptibly, move his forefinger! Behind his wheelchair, hidden from the camera, was the machine that enabled his lungs to breathe for him, and watching him are millions who saw his finger twitch. I though I had it bad, I said to my mind, but look!  ex-Superman has to be fed by someone else, had to be bathed, had to be cleaned, had to be lifted to bed, and sometimes wake from dreams he was his normal self, to be jolted by the horrible reality of his enervated life, or what's left of it. I did not feel too good about this planet at all. When Reeve died a year later, I felt relieved for the guy. Rest in peace gained for me a deeper meaning. To die is to rest -- last line of Rizal's last poem. How true.


Posted by William Pogi Chua at 5:32 AM No comments: