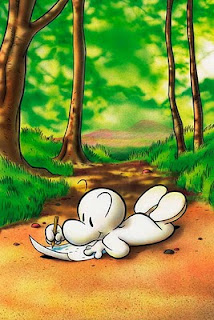 You know you are reading a masterpiece when the very first sentence grabs you by the collar, and hurls you into thoughts of your own, then impels you to write them down. You wish you can narrate, by even a smidgen, as well as the author, at the same instant knowing the impossibility of the task, which requires a gift seldom bestowed upon mere mortals.


"Call me Ishmael."
And off I spin in a freefall of discordant thoughts that jingle-jangle and meander like a restless wind in a letterbox, they tumble blindly as they make their way across the universe, where, somewhere I have never travelled, gladly beyond any experience, Melville's and Lennon's and cummings' mindgames are forever swirling round and round like a circle in a spiral, like a wheel within a wheel, like the circles that you find, in the windmills of your mind.


The windy rhetoric flings me back to Earth, my ears ringing  -- Hello, Willy, well, hello, Willy, it's so nice to have you back where you belong. I ignore the dust on my face and pride, thinking more of the disapproving glare of Mencken, a fearsome mentor and idol from way back when. He taught me that poetry and reality can never mix. T.S. Eliot may be resurrected by Andrew Lloyd Webber in "Cats" -- where his verses form the backbone of  "Memories" -- but his efforts at prose have faded into the wasteland of literature. Louis Armstrong's and Webber's compositions live on -- the dust that covers me will nevermore touch the works brought to life by those who are given the key to immortality.


The light of the torch borne by Mencken, laid low by stroke, was rekindled in their own way by sardonic columnist Mike Royko; Raymond Chandler, who created suave and patient private-eye Philip Marlowe; and Mickey Spillane, whose tales of savage Mike Hammer (who I think was the forerunner of today's Dark Knight) are hardcore literature, like Chandler's, like Ian Fleming's James Bond novels and vignettes. The blessed can really live twice: once when they are born, and once when they are resurrected by their own creations -- all connected to each other, in a circle in a hoop that never ends. They can paint with the color of the wind.

Running through all the masters' work is their mordant disdain of the safe and mediocre life, an existence shielded from the coarse, visceral, cruel, indifferent but colorful way of the world. Clerks, accountants, greengrocers, salesmen and other like-minded members of the herd are but glorified servants; their petty dreams, their dismal endeavors and lives of  drudgery, in the long run, don't amount to a hill of beans in this crazy world.


Rick Blaine is more alive than billions today who sacrifice their youth, their ambitions, their lives to mundane pursuits; no lofty thoughts stirred their minds, unperturbed to the end that there is an alternative to mediocrity, that there is delight in life, pride in achievement, poetry in motion and music for chameleons. But to surmount their fate, the fire in their minds and souls must be ignited; they must have at least a portion of the gift the gods heap upon the artists of the realm. But they do not listen, they're not listening still -- perhaps they never will. It is the timeless dust of those lost souls that covers me.
Posted by William Pogi Chua at 9:29 PM

I always enjoy your posts. This one really inspired me to go back and take a look at some of the truly great writing of the last century. Thank you. Hope all is well with you.

Thanks for being here. Don't you ever go, ok?

Actually I forced myself to write this one down, for fear of losing the little capacity I have to meet my enthusiasm. If only I have talent enough to meet my love for writing.

Last century is on the mark, except for Melville, who belonged to an even earlier century. What do I write when I'm lost? I just toss a salad of pop lyrics, scraps of fictional orts from books and movies, and hope I come up with something palatable.

Thank you for tasting my potluck -- your kindness kindles kindness.