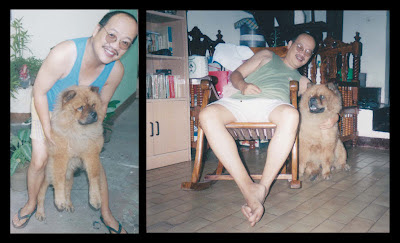 Rex when we were both healthy. He always had more hair.

Rex, belonging to that big and gentle Chow Chow breed, was capable of harming a fly, though not intentionally, and he was probably not aware of the nature of his deed. One afternoon years ago I looked out the door at the open garage, and just in time I saw Rex chomp down on a pesky fly that had been buzzing around his head for hours; the remains of the fly, cut in half, made crazy spirals down to the cement floor. That's one of the main memories that comes to mind when I think of Rex, who this morning passed away at the vererable age of 11.

We don't know if it's the debilitatingly hot weather or if it's Rex's deteriorating health that caused him to succumb to a heat stroke Thursday night. When Leena arrived home at about 9 p.m. Thursday, she found Rex lying on his side on the cement floor of the garage. Several ice packs were hurriedly placed all over his body to lower his temperature and to steady his labored breathing. When it seemed Rex was out of immediate danger, Leena placed an emergency call to Russell, who has been a reliable and capable vet to our five Chows and 20-plus cats.

After assessing Rex's condition, Russell gave him an injection to lower his body temperature to less than 39.4, which he said was dangerously critical. Earlier, I went cold when I noticed that Rex had involuntarily emptied the content of his stomach by vomiting and voiding: signs that the defensive system of his body had gone on full alert, abandoning the digestive system to sustain Rex's faltering cardiovascular system. When Rex's breathing returned to normal level, we kept a watchful eye on him while Leena discussed with Russell the medicines required. It was almost midnight when Russsell left, dropping off Melay and Marilyn to the Mercury branch near Munoz Market to buy the medicines.

Leena hardly slept that night, going to the garage to keep watch over Rex. Early Friday morning Leena decided to take Rex to Animal House, the pet hospital in Cubao. Blood tests, ECG, X-rays, and other tests were performed on Rex. Old age caught up with our old pet, who through the years had unobtrusively led a quiet existence at the garage, enjoying a treat of chicken once in a while, greeting Leena when she arrived home from office. That Thursday night he was not able to approach her.

So life went on at home on Friday, although we were aware that one mainstay of our lives was missing, fighting for a life made feeble by age and illness. But we dared not dwell on the fact that hope was not an option in this case. If it was just a matter of time, then time could flow on along its stoical way as we gather fortitude for when reality descends. It descended this morning. And it's Leena's birthday today. If it should be considered a gift that Rex's suffering was mercifully ended, so be it.

It's a terrible thing to learn late in life that death, like life, can be a gift.

Leena with Rex through puppyhood and cuddlyhood.

***
The following is Leena's message to wellwishers on her birthday:

To my friends, fellow cat and animal lovers who remembered me today, A VERY BIG THANK YOU! I am sorry that it took time before I could respond. I had to bring our beloved Rex home from the hospital and arrange a small, solemn funeral. Perhaps Rex wanted me to remember him whenever I celebrate my birthday, that's why he chose this day to say goodbye. I was hoping that he could still spend some moreyears with us, but as the vet said, he is already a super senior Chow. He is only 11 years old, and now that he's gone I ask myself where did the years go? It seems only yesterday when he was an adorable, huggable puppy. Time does fly. To the most handsome chow in the world, until we play again. We will miss you Rex.