Want to hear what the Universe sounds like? Put your ear to a seashell. For full HD effect, read Matthew Arnold's "Dover Beach" while listening.
-- William the Henry 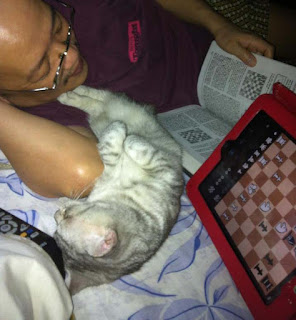 2:57 a.m.
It has become a habit to me, embarrassing I think, of extolling the magnanimity of the universe, of presuming to know its intimate nature, of imposing upon its generosity even. Accompanied by darkness, and insomnia and the silent stars, and the heavy purrs of Silver as she paws this electronic pad, I imagine my Chinese teachers in younger days, admonishing me for my lack of humility.

"Ah, so, already a wise man, hmm? Maybe as precocious as Feynman, if not as sagacious as a Sagan, eh?" Miss Lee remarks in the dark, sounding like a Jewish mother in a Philip Roth novel, instead of a proper but sardonic Chinese mentor marinated in the Analects of Confucius and steeped in blind faith over the goodness of the thieving Generalissimo Chiang Kai-Shek who, with his voluptuous wife, formed the original Conjugal Dictatorship of Asia. The Ferdinand and Imelda of the '50s, so to speak.

"He can't wait, our little genius," interjects Mr. Lim, "Not a late bloomer like that poor Einstein fellow, of whom nothing much had been expected of him, as we expect from our brilliant prodigy." I breathe a sigh of relief, making Silver, sitting between my nose and iPad, jump an inch. Mr. Lim, even in this imaginary exchange, has joined the scene, adding his own remarks in a bantering way to draw any potential poison from Miss Lee's harsh intrusion upon my afternoon nap (in her Geometry class). Mr. Lim had always protected me by deflecting the shrewishness of the old maids in the faculty.

3:31
How Mr. Lim got into this story, I don't exactly know. Maybe because he saw Miss Lee approaching my desk, in this imaginary flashback extending back almost 50 years? I don't even remember how this story got stuck in my head, pounding my sleep away in these unholy hours so I can type, to make this story as real as life -- "of such stuff as dreams are made of" -- to make it tangible as the ripe fruit fallen from the Raintree in my mind, to be printed, to be read by those who will be puzzled by its meaning, if any at all, and by those who will understand and appreciate it. Even if I myself don't get it?

Yes. I hear the answer. Without knowing why, I know the answer is right. Yes, you (this story, not I) are a child of the Universe, no less than the trees and the stars, you have a right to be here. And whether or not it is clear to you, the Universe is unfolding. As it should.

An affirmation! A fulfillment of a desideratum (not mine. Of the Universe?) to exist, to make a mark where life blooms with fecundity in this part of the vast Milky Way, contradicting the emptiness of space, giving breath to the lifegiving heat of distant stars. Red, white, yellow, the stars send off their seeds with each nuclear pulsebeat, to grow where they can, to evolve and develop a cellular structure that can type out the Master Formula.

4:24
And so, seemingly, out of thin air I pluck this concept and share it here, through millions of pixels to cyberspace. This is one of the billions of stories that exists -- E pluribus, unum; one among those which survived to be seen, to be scorned, to be brushed aside, to be shunned, to be admired, to be.

All I understand is that weaving a story is not unlike the process by which a spider seems to pluck endless webs from thin air. A gift, if you will, from the Cosmic Cornucopia. Therefore never send for whom the bell tolls, just ask the Universe. The answer, my friend, is blowing in the wind.
Posted by William Pogi Chua at 4:02 PM