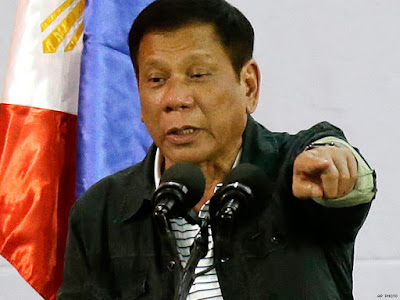 The president seems to be misleading the public about the killing of innocent victims, including children, in his bloody war against drug lords and pushers. Is it because his messiahiad turn of mind has led him astray too?
Let's see how this president uses reasoning or arguments that sound true but are off the mark. I never thought anyone in this world can make De Lima look good in my eyes, but it takes a Duterte to shatter my misconception. Against my will (and taste), I find myself defending the scarf lady against the imputation that she's the star of the sex scandal tape. Duterte's personal vendetta against the former Justice Secretary, who investigated him for the summary killings in Davao when he was mayor there, went overboard when he used his dumb crony, appointed DOJ Secretary Aguirre, to hurriedly present half-baked evidence against her, and her driver. They are trying to impeach her character, as if facts against the extrajudicial killings will be negated if De Lima and lover were proven guilty of receiving money from the drug lords and making love with each other.
It's as old as the New Testament, this defense of sinners against their accusers and critics, Duterte's retaliation against Obama and UN's Ban Ki Moon's comments about the mass killings: "Let any one of you who is without sin be the first to throw a stone at her. [John 8:7]" refers not to De Lima (though she is getting on in years) but the woman in the Bible who was caught in adultery (well, maybe it's De Lima), and Duterte certainly is not defending her against himself! If this is confusing it's because Duterte uses arguments that can backfire on him. On one hand, he entreats Obama and the US not to be so righteous; on the other hand he keeps hurling charges (and epithets) against all who does not approve of his murderous campaign. He is the pot calling the kettle black, but he can also be the kettle. We tread a double-edged blade when we accuse any one, or if we are accused. Matthew 7:1 -- Do not judge, or you will be judged.
The main point, after sweeping away all the sophistries, is that even if the United States massacred thousands Filipino rebels and hundreds of Moros in order to take control the Philippines, will that make right the extrajudicial killings happening here every day?
If a dropout says one and one and one is three, will he be considered wrong if a mathematician says the right answer is 3.1416? During Hitler's genocidal campaign against the Jews, hunders of German physicist gathered to prove that Eintein's Theory of Relativity is wrong. Told about this, Einstein said, "If I'm wrong, just one of them is sufficient." Duterte points to the more than 16 million who elected him to office as the source of his mandate, but what about the more then 84 million who still believe that the death penalty is still out of the bounds of our law?
The death penalty was repealed by Duterte's close friend Gloria Arroyo when she became president. This act certainly saved her from the lethal injection for plunder and electoral fraud, all heinous, all acceptable now as long as you are a presidential friend. Even presidential kumpare Peter Lim escaped Duterte's avowal that this Chinese drug lord will be killed the instant he lands in our airport. Instead he was presented on TV, with Duterte casting doubt whether he is indeed the one on the police drug list. What kind of intel was Duterte being fed that thousands were killed without verification and this kumpare is not properly identified? No photos of him was included in the government files? So Peter flew back to China. And when Media asks why only small time druggies were being killed, Duterte says, "Because only the henchmen are operating here. The bosses are in China. Kung gusto mong hulihin sila, pumunta ka sa China." So much for consistency. How long this zarzuela will go on before the Duterte trolls wake up? Well, Marcosian fools are still growling long after 1986. Let me like the Devil, quoting Scriptures: Proverbs 26:4,5 -- Answer not a fool according to his folly, lest you also be like to him…
Posted by William Pogi Chua at 8:30 PM