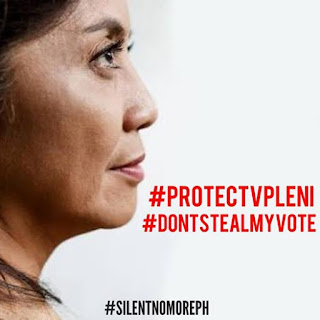 Now it's official: VP Leni has quit her post in Duterte's Cabinet. She has confirmed that moves are underway to oust her from the vice presidency.

Duterte has been actively working for the reinstatement of a Marcos to the presidency, since he was coaxed, cajoled and financed by the Marcoses to grab the power offered him. And the Supreme Court has shown its adherence to the "feed our piggy bank" rule of law. Estelito has ensured the burial of the dictator (along with that EDSA 1986 event); now he's transferring some stolen wealth to some SC justices's secret accounts.

The peasants' tepid protests after the Marcos burial, with full state honor, plus a wreath from lackey Duterte, show how enfeebled our sense of outrage has become, how we respect institutions that, instead of being excoriated, are obeyed and respected without question -- the SC, which cited an AFP regulation as the basis for its decision to let the thieving and treasonous Marcos join the resting place of real and valiant soldiers; the PNP, which now serves as a killer squad for the loony president; the AFP, which Duterte has been courting with pay raise and housing incentives, because it will soon enforce a burgeoning tyrant's powerplay; the Cabinet, which now consists of leftists mellowed by perks of positions, foolish men drunk with power, lying in their old age to explain Duterte's twitches of insanity; pompous reporters and bitchy bloggers lifted to lofty positions their grammar cannot reach; a Justice secretary whose wig cannot hide his incompetence; and Asecs and Usecs drawing high salaries from the high taxes the boobooisies squeeze out of their sweat every month.

In a country where servility is the norm, education and knowledge are mere tinsels that lack the strength to strangle the criminals in high office. It is the tragedy of this country that not one leader in its entire history has really cared for its citizens. And what is there to love in a people whose loyalty sways to where the money flutters? Rizal wrote two books about this, and on the morning he was executed in Bagongbayan Field, people brown and white cheered, under holiday buntings, after his body hit the grass. When I see Duterte's eyes, I see a man who will not let that kind of fate befall him, because that is not his definition of "wise," and, with that kind of mindset, respect and patriotism and service and honor become mere catchwords to beguile dumb voters. "The more things change, the more things stay the same."

There are times when I think we sweathogs deserve our fate. Who does not bow to this democracy -- this system where the majority rules? Let me state this another way, and see if the taste remains the same: Our lives are governed by what is decreed by the lowest common denominator of our society -- the uneducated serfs, the miseducated diploma-holders, the stressed-out employees, the dregs of society -- mostly ignorant, superstitious, fearful and cowering every day and every tomorrow, rude, noisy, dishonest, sycophants, hypocrites, and other characteristics that make us imbeciles. All, except the wily and the crooks, entrusts in form of taxes a third of their earnings to thieving government officials who should be hanged by their intestines on the nearest electric posts. Yet, as Stephen King said, we all float. The sea of humanity has become huge, and polluted. At least we are consoled by the thought that the young thugs who are shouting about the beneficence of Martial Law will soon get a personal taste of the New Society-the sequel, sponsored by Dodirty.