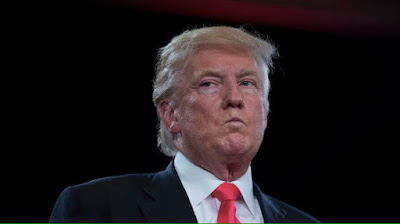 True, Donald Trump is still a mean, mealy-mouthed liar, a tax-cheat, and a vengeful bully, but his action to send 59 Tomahawk missiles to disable the Syrian air base which launched a gas attack on Assad's own people received the approval even of politicians and generals who still doubt his ability to lead America. Trump did not win the presidency: Obama and Hillary, by their foolish consistency to rules instead of using brute force against the big bullies of the world, defaulted the seat to the racist tycoon.

Assad had stepped over Obama's red line three or four times, launching separate gas attacks which killed tens of thousands of Syrians, and what did Obama do? He asked the Republican-controlled Senate to give him the permission to act. He relied on the United Nations to support his intention to attack Syria; Russia vetoed the resolution, and Obama, Secretary of State Hillary Clinton, and UN Secretary General Ban Ki Moon bowed to weak, unenforcible rules, held more meetings, issued useless condemnations and expressed futile outrages, while the death toll in Syria climbed from 8,000 (others died from bullets and bombs supplied to Syria by Russia) in 2011 to 400,000 in 2016, when Obama finally left the presidency.

In a world where murderous men like Assad, Putin and Kim Jong Un tend to take over the vacuum of power abandoned by weak intellectuals, the United States does not stand a chance under the likes of Obama, Hillary Clinton, Kerry and Ban Ki Moon. Out there in the global village, the street fighters can only be beaten by men who discards the rules if and when necessary. Obama talked glibly of principles but cannot uphold them, he wrote books about himself and uprightness, but Russia and Syria, North Korea and China were dancing on the world stage. The West looked on while Putin annexed the Ukrainian territory of Crimea in 2014, and later on Russian separatist shot down Malaysian Airlines Flight 17, killing all passengers and crew on board -- 193 Dutch, 10 British, 4 Germans, and 4 Belgians. Putin is a war criminal, so is Assad, yet there they are, not placed in prison by the international Court of Justice, and playing the charade of condemning the US attack. And the dead, who talks for them?

Our president, Duterte, did not have to go as far back as the Filipino-American war to chide the US for not protecting its treaty allies, he has only to look at Obama's feeble talk against China's occupation of Philippine territory. Even now, months after Trump took office, Duterte has voiced out his doubt about the US sincerity to defend a vital ally in the Pacific. "Why does the US not do anything out there?" he said. Obama looked with disdain at Duterte's killing of thousands of Filipinos, but Duterte could have spat back the number of Assad's victim at Obama, who let the death toll in Syria swell from 8,000 to a horrifying 400,000. Trump's latest act -- without consulting the US Congress, without waiting for Russia to veto another UN resolution to bomb Syria -- he just went on ahead and sent the Tomahawks on their way. Now the UN has announced it is holding an emergency meeting about the attack, and maybe ask Trump to undo what has been done? There's no problem from the US senators like Rubio and McCain, who, along with nations not aligned with Russia -- Syria, North Korea, China and Iran -- have expressed their approval over Trump's much-awaited resolution against Putin and Assad's wiping their asses with the American flag.

Now it's Russia's turn to accuse the United States of breaking international law, law which favored the strong and murderous, law which did not protect the weak and unarmed. It's the bully Trump that Russia has to contend with -- the teacup-eared Obama has fluffed away.

The United States is back in the game -- if Trump does not flub it.
Posted by William Pogi Chua at 7:39 PM