Evolution of the Philippine Flag


EIGHTEEN YEARS AGO the world was younger and so was I. I was more innocent, less experienced; so was the world.

Angeles City, too, where I walked on one of her unpaved streets, under a sheet of rain, tiny fingerlings probing me for spots left unwet.

I laughed. I was sopping wet but I laughed with my newfound freedom to get wet with impunity. Drops and drops of waterpins dripped from my hair; there were a lot of drops because I had more hair then.

Suddenly a runt of a jeep – there were very few full-length Saraos then – splashed by, carrying a bunch of palengkera in its belly.

One of them cried out to me: “Oy, boy! (I was that young. At least I looked that young.) Queni, sake na ca; bayaran que’ng pamasahi mu.” She was a stout motherly woman, her heart as stout and soft as she.

The jeep waddled to a stop, but with a friendly wave I let it go, the woman still protesting, “Boooyyy…”

It was fun while it lasted. Of course I paid for it the next day with a raging fever. A few weeks later the big flood came and washed away the bridge near Tibagin. A few months later bombs exploded and Marcos declared martial law.

At that time, old-age pension was unheard of because in the provinces old people were cared for. Orphanages were not built because no child was ever without a home. Mental hospitals were few because Filipino life did not provoke nervous breakdowns.

And poverty was not a shame then because no Filipino would see his brother starve. Besides:
EDJOP was still alive.
Eman still wrote his poems.
Cory visited Ninoy in his cell.

And through all my doubts, I admired people I would later hate.

But that was a long time ago, when beggars were not syndicated, when coup d’etat was only an exotic French phrase, when we had to look up a dictionary to know what pedophile meant.

That was when Snoopy ruled the Earth. Garfield did not exist, Calvin and Hobbes still a universe away. The seed of Pugad Baboy was not even planted yet.

Those were salad days even if Nixon was president of the United States, Marcos the dictator of the Philippines; even if we didn't care as much about the US bases and we didn’t ask why we sent our soldiers to fight in Vietnam. We coasted along.

So it was almost too late when we realized that the old-age pension was missing because they closed down the Veteran’s Bank, that orphanages were not filled because the children were sold to foreigners. And the reason why mental hospitals were still few was that most of those who should have been committed there were occupying Cabinet positions instead.

We became sophisticated. We learned to bury some of our dead under film centers. For a papal visit, we whitewashed poverty out of existence by erecting walls around the squatters.

Ninoy fasted and almost starved to death, in a country so richly endowed by nature that it was almost impossible to go hungry.

What happened? There was a time when Rafael Zulueta da Costa, a poet as fine as this country could produce, compared the Filipino to the molave – brown, sturdy and resilient.

Or perhaps my friends Ody, Abner and Joven will agree if I use another definition -- that the Filipino is Brown Sugar: coarse, unrefined, undiluted by foreign and false flavors, yet offering the same sweetness; more natural, therefore more honest.

And brown. As brown as the skin of the fat, gentle fishwife who with instincts as old as the islands, gives sanctuary to any boy running from the rain.

But the boy, sometimes he is not as young as he looks; the rain is not always wet, not when it is made of lead.
***
I’ve got brown sugar in my veins. My veins are as taut as the strings of a guitar strumming the song of a struggle far more destructive than the RAM-SFP coup stuff, much more insidious than the AFP vs NPA war. I am fighting for the Filipino mind. 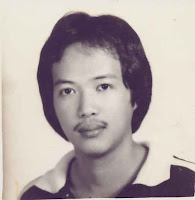 You see, out there in the streets walks a treacherous woman with more money than brain, more pesos than sense, who would have us believe that white sugar is infinitely better than brown sugar.

She hires hacks with saccharine and nutrasweet in their veins, with molasses as their brains, who churn out tripes in their constant attempt to convince us of the superiority of their pale patrons and the inferiority of our race.


Your culture, they hint, is damaged.

Compare: you have no temple, no Angkor Wat, no grand mausoleum like the Taj Mahal, no Great Wall, no Hanging Garden, not even a Stonehenge, or Easter Island heads. Even poor Peru has Machu Picchu, but you, the only pyramids you have are the ones Johnny Midnight sells.

The Rice Terraces – What of it? It’s only a food-oriented monument to the first brown sugars who molded and cultivated it.

Come to think of it, even the names of your tribes are food oriented. Tagalog, Cebuano, Pampango, Ilongo, Bicolano, Ilocano – translated, don’t they all mean the same thing? A body of people who lives near a body of water, where they pluck the fishes for their food, which make their hair kinky and their noses flat.

Why, even your first freedom fighter was named after a big fish. He made chop-chop out of that grand culture bearer, Magellan, in Mactan.

***
Eighteen years later, the big flood returned and the body of water turned bigger than the body of people living near its edge and washed them away.

On that Saturday morning, while houses in Dolores, Abacan and Sapangbato disappeared, my jeep was stuck in the middle of a bridge in Mabiga.

Blankets of rain poured on me, but there were fewer drops that dripped from my hair.

Cultured men in their cultured cars beep-beeped and whizzed by, followed by full-length Saraos – there’s a lot of them now. One even tried to scrape the backside of my runt of a jeep. Then a garbage truck rumbled behind, and the driver, a thin man with a straw hat, jumped down and we pushed the runt to the shoulder of the road.

When we couldn’t figure out what was wrong, he returned to his truck and drove off – he still had garbage to collect, even in that rain – but not before dropping off one of his men to stay with me.

“He’s our mechanic,” the driver said. The man, shirtless, wet and shivering, looked under the hood.

Thirty minutes later, the man, his son and me – three wet miserable creatures -- worked under the hood until the faithless runt throbbed to life again.

I paid the son for fixing the jeep. For getting out of the warm comfort of his house and coming into the rain to help his shivering father and me, he was not paid. Filipino culture has not yet decreed a price for that sort of thing.

The father did not ask and I didn’t offer any payment. I am much older and more experienced now to know that to do so would be an offense. The truck driver was his compadre.

“Salamat,” I said. It was the only acceptable mode of payment.

Then the truck rumbled into view from the opposite direction, its belly already full of the cultured garbage of cultured people. The driver, his straw hat dripping, waved me away with a smile as his shirtless compadre hopped into the truck.

Later on, I figured out that the truck driver, the father and the son, and that fat woman 18 years ago, were the same products of this unfortunate land -- uneducated but gentle, less cultured but lacking the great unkindness of sophisticated races.

I’ll stay with them, maybe only for a short time -- because my life is short. I’ll fight the good fight with them, as long as the treacherous woman leads the good life by throwing brown sugar down the river.

This first appeared in The Angeles Sun in September 1990, then in Midweek magazine in November 1991. Maybe it's not surprising that this article has maintained its relevance after more than 20 years.

Posted by William Pogi Chua at 5:02 AM

In a previous life I had a friend who lived and worked in the Phillipines for 10 years. Your story stands in stark contrast to her vision of life there. I suspect your's is more true.