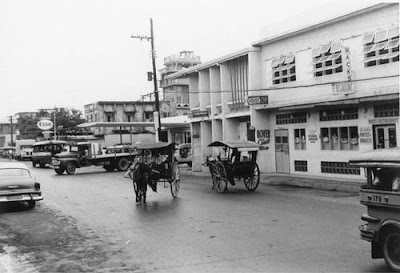 
The Moving Finger writes; and, having writ,
Moves on: nor all thy Piety nor Wit
Shall lure it back to cancel half a Line,
Nor all thy Tears wash out a Word of it.

I saw this photo posted by Taga Angeles Ku on Facebook, and memories beyond the scope of this two-dimensional digital image rushed in.


Back in the '60s, the Esso gas station sign was one of the first things I saw from my window in my waking hours. My room is on the second floor of a house just about across that gas station. Early at night I heard the occasional jeeps passing by; there were not many then, so the calesas, pulled by skinny horses, were not obstructions at all. Even in the mornings and afternoons of those quiet years, traffic was always light and, as can be seen in the picture, the view was not obscured by pollution.


At ground level of the house we rented was the junk shop my father managed. I was in grade school then, taking up English courses from 7 a.m. to 12 noon, and a Chinese course from 1-5 p.m. I made good grades, but, thinking about that now, I realize I was kind of dumb then. For example, I was not aware that my family lacked in many aspects, such as a house of our own, not exposed to the hustles of Henson Street. Maybe it's because Grade School leveled our status -- poor and lower middle-class kids mixed with rich kids whose family owned a hotel near Crossing, a big grocery store downtown, or a drug store just beyond that Esso sign.

So up and down the junk shop my family thrived. On weekends I was asked to stay at the shop: that meant help my father while he weighed the corrugated boards, sheets of folded tins, rusty iron metals and nuts and bolts, and stacks of old newspapers. In mid-afternoon, as the sun highlighted the road outside the store, I would sift through the bundle of newspapers, separating all the cartoon pages, especially from the Stars & Stripes. Sometimes I got lucky and found a portion of a Peanuts book or -- heaven on Earth! -- an entire comic book, or a letter envelope with a stamp still stuck on it. At night I would pore through my finds, not knowing that the black-and-white strips, the Batman adventures, and my growing stamp collection were influences that would stick for life.

I don't remember the year we moved to Henson St., but the junk shop with second-floor living space was certainly many notch above the rectangular one-room tenement we had left behind in an alley leading to the Apo Church. That church is located in Lourdes Sur East, where, my mother told me, I was born around noon of a Wednesday in 1955. "Yes," my grandmother would add later on, "there was an eclipse, the sky turned dark in the middle of the afternoon, the dogs howled, and all the chickens, after cackling their protest, went to sleep."

Google spat out the only significant event that occurred the day I was born: Ngo Din Diem declared South Vietnam a republic and became its first president. He would be assassinated in early 1963. A few days later, 1963 Nov. 22, President John F. Kennedy would be assassinated too. I remember my mother waking me very early on the morning of November 23 -- it's still dark outside -- and showing me the front page of a special edition of the Manila Times. The front-page photo showed a dotted line starting from a top window of a building, leading to a spot in a car below -- the trajectory of the bullet that blew open a side of Kennedy's head. "The president of America was killed," my mother said. "Uh-huh," I said, my mind more on the unusual fact that someone in our house had bought a new newspaper, not a used one to be priced by weight. Strange day. The smell of fresh ink on clean paper would stay with me forevermore, when I buy a new book, when I add a new Batman comics to my collection, when I get fresh bills from the bank. A month and a year later after the Kennedy assassination, the picture above of Henson Street would be taken.

We slept early at night on Henson Street, unlike those crazy chickens in Lourdes Sur East. I remember the fading roar of cars leaving the city, the clop-clops of the hooves of a horse pulling its load to home and a well-deserved rest. I see through my window the high structure across the street and I wonder what kind of people live in such a place, so big and not made of wood. Sometimes I hear a jukebox somewhere, making the night soft with guitar music: Faithful Love, I Miss You So, Sleepwalk. The titles of those songs I would learn when I grew up. Through the years, in High School, in College, I would try to perform the tunes on a succession of guitars bought and broken, with no success. And one song by the Beatles remains magical in my memory because it was played one night when no other sounds obtruded: Ask Me Why. Haunting.

And so they remain, the old songs, the Peanuts strips on half-a-book without cover, Henry, Nancy, Dagwood, Dick Tracy, Casper, Wendy, Richie Rich. The years would pile new memories on top of old, and although the structures of lives and buildings have been so drastically altered now, just an old picture in Facebook can bring the past to life. That version of the past will live, as long as the old cells in my faltering mind sustain the existence of my Angeles, in high definition. 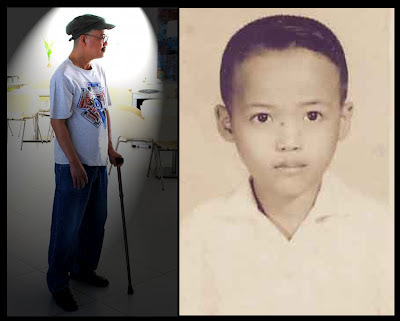