Dreams are where living and dead friends meet.
--William the Henry 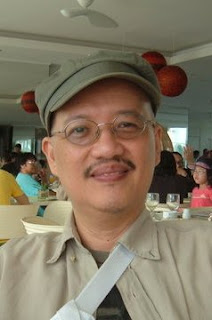 This is a story involving events before I retired from People's Tonight in 2004. I am no longer connected in any way to the paper, which has now passed on to a small-minded and malignant entity, or to the firm which owns it.

I noticed that in dreams people you love – my parents, Ody and his wife Beth -- live on: they talk, they interact in scenes scripted by slumber. Those scenes existed in my mind, somatic if not strictly real; that dream is now part of this warped universe.

Ody was a journalist in the faithful sense of the term – alert, not corrupt, temperamental but innately kind, intelligent, grammatical, raw and somewhat rough in manner. Highbrows less intelligent might call Ody and people like me lowlifes.

Indeed, we are misfits in polite society: our hair, if not shaved off, is as unkempt as our manners are coarse. We smoke, we drink, we gamble everything away, even our lives. Ody died; I survived two heart attacks and an aneurysm. I am a dead man still making observations on life, now with a better perspective on its priorities. I'm serious, I'm fun. A specter straddling two lives.

When Ody brought me to Manila to work as a correspondent for People’s Tonight, he gave me my penname Henry. I used it as a journalist and I use it now in ebay. Insiders and friends at People’s Tonight called me William, the name recommended by the midwife to my parents when I was born.

I had second thought about being “Henry” at first. I considered Henry a wimpy name, but I did not want to contradict one of the three real friends I will have in this life (a fact which I would realize years later). Ody obviously thought the spoofs I had been writing for The Voice, the Pampanga tabloid he was managing then, are as lighthearted-funny as O. Henry pieces. O. Henry, by the way, is the penname used by William Sydney Porter.

At that time, I had improved my reading level and consigned O. Henry to a position just a notch above timewasters like Robbins, Ludlum, Sheldon, Wallace, Christie and others. I would have preferred the “Henry” in H.L. Mencken, one of my lifetime mentors in reading, thinking, and writing.

After two months on the beat for Tonight, I was promoted to copy editor. Personnel asked me for papers to formalize my inclusion in the firm as a regular employee. To make a long story short, I got, with assistance from a veteran and wily Tonight reporter, the required police and NBI permits, medical certificate, and even a new SSS ID, all under Henry. So I had Henry IDs to replace the William entity. A new name to shed an obsolete life. The year was 1994, five years before my first myocardial infarction.

When Boss Fred, our Managing Editor, sent my promotion papers to Personnel I asked him what name he had submitted for promotion. “William, of course,” he said, his eyebrow a question mark. I need not have worried: after two months I knew almost all the employees in the building; I even shared beers with the guards during Yuletide and Lenten holidays. Any document bearing the William name would be automatically converted to Henry in any Journal department. I was Henry legally, William personally.

Ody has gone before me, but I have retained the Henry part of my life. My email address is triggered by Henry; I get and pay my ebay remittances through my Henry registration, but my username in Facebook is William. I answer reflexively to both names, although I will certainly be surprised, and irritated, if a close acquaintance or relative addresses me as Henry. William is connective, Henry a fence, Willy a rare endearment.

Boss Fred, Ody Fabian, Franklin Cabaluna have all closed their earthly accounts. A stroke in 2004 forced my retirement from the tabloid, surviving to see how sordid and petty all things still are, to see ex-friends vainly fight for positions and perks which they think will not end.

What brought this on? In the wee hours of this morning, I turned on the TV and chanced upon the tail-end of the 1973 Best Picture The Sting, where in the closing scene a woman embraced Paul Newman and said, “Oh, Henry!” Through the years I still think conman Henry Gondorff is cool. A lowlife, but cool -- like a journalist.

Then my mind meandered to Band of Brothers, which in another channel this morning was keeping company with insomniacs like me. In Henry V, William Shakespeare wrote:
"We few, we happy few, we band of brothers;
For he today that sheds his blood with me
Shall be my brother…”

Elegant characters crafted by great artists bearing my name and alias. I can live happily with that. Call me William the Henry.

Ahoy! Ahoy! Look what I found: one of the articles in Mencken's Damn! A Book of Calumny. I print it in full.

Why doesn't some patient drudge of a privat dozent compile a dictionary of the stable-names of the great? All show dogs and race horses, as everyone knows, have stable-names. On the list of entries a fast mare may appear as Czarina Ogla Fedorovna, but in the stable she is not that at all, nor even Czarina or Olga, but maybe Lil or Jennie. And a prize bulldog, Champion Zoroaster or Charlemagne XI. on the bench, may be plain Jack or Ponto en famille. So with celebrities of the genus homo. Huxley's official style and appellation was "The Right Hon. Thomas Henry Huxley, P. C., M. D., Ph. D., LL. D., D. C. L., D. Sc., F. R. S.," and his biographer tells us that he delighted in its rolling grandeur—but to his wife he was always Hal. Shakespeare, to his fellows of his Bankside, was Will, and perhaps Willie to Ann Hathaway. The Kaiser is another Willie: the late Czar so addressed him in their famous exchange of telegrams. The Czar himself was Nicky in those days, and no doubt remains Nicky to his intimates today. Edgar Allan Poe was always Eddie to his wife, and Mark Twain was always Youth to his. P. T. Barnum's stable-name was Taylor, his middle name; Charles Lamb's was Guy; Nietzsche's was Fritz; Whistler's was Jimmie; the late King Edward's was Bertie; Grover Cleveland's was Steve; J. Pierpont Morgan's was Jack; Dr. Wilson's is Tom.

Some given names are surrounded by a whole flotilla of stable-names. Henry, for example, is softened variously into Harry, Hen, Hank, Hal, Henny, Enery, On'ry and Heinie. Which did Ann Boleyn use when she cooed into the suspicious ear of Henry VIII.? To which did Henrik Ibsen answer at the domestic hearth? It is difficult to imagine his wife calling him Henrik: the name is harsh, clumsy, razor-edged. But did she make it Hen or Rik, or neither? What was Bismarck to the Fürstin, and to the mother he so vastly feared? Ottchen? Somehow it seems impossible. What was Grant to his wife? Surely not Ulysses! And Wolfgang Amadeus Mozart? And Rutherford B. Hayes? Was Robert Browning ever Bob? Was John Wesley ever Jack? Was Emmanuel Swendenborg ever Manny? Was Tadeusz Kosciusko ever Teddy?

A fair field of inquiry invites. Let some laborious assistant professor explore and chart it. There will be more of human nature in his report than in all the novels ever written.
Posted by William Pogi Chua at 9:48 PM