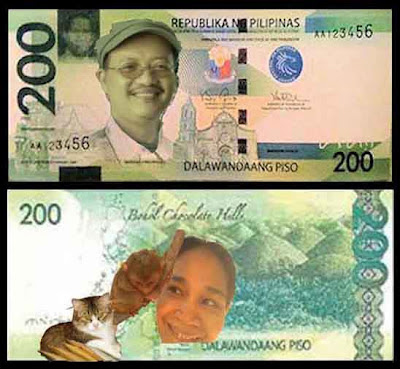 3:04 a.m.
In one or two biographies of the Beatles, John Lennon was quoted as saying that he wanted to be a millionaire by the time he became twenty-one. When I first read about that in Hunter Davies' paperback I was in high school, and I thought, "Why not? Me too. Should not be too hard to do."


3:16
Looking back, I wonder about the refulgent optimism of youth. Lennon wanted a million pounds so he could drop out of school and not have to work for the rest of his life. He made it. I was about 16 when I bought and read the Davies book.


My goal was smaller in scale: I needed a million pesos to buy the entire stock of very early Batman comics a music record dealer kept in several crates in Angeles City. When I turned 21 I found myself in college, stretching my allowance to make ends meet. Not rich, no comics even.


I did not know the basic ingredients of success back then, in 1972. Neither did the professors, I noticed.

To be rich you must have (1) a tremendous amount of talent, and (2) a more tremendous will to use it to attain your goal. I did not have either.

3:45
John could sing and compose tunes, John was creative in his guitar play, John had the courage to drop out of school, which he felt was hampering his plan. He formed his band, met Paul and George and (3) worked liked hell to earn some money. It took some time before (4) they earned their luck that launched them to fame and history.

John has been dead at 40 since December 8, 1980, but his music still brings in big royalties. He's dead but still earning much more per annum than the majority of living stiffs who go to 9-to-5 jobs, like high school teachers.

George Harrison died of cancer in 2001. If you're a member of the bestselling rock band in history, death does not stop the income from pouring in.

Paul McCartney still lives. He sang Hey Jude at the London Olympics at the opening ceremony. He has been a millionaire since he was 21.

4:02
Lennon reminds me of the young Chess prodigy Bobby Fischer, who at 15 trounced old champions and became the youngest grandmaster then. He dropped out of school so he could spend all his time absorbing tons of books about anything concerning Chess. He had heaps of talents and he used all his time and energy on the game. In short, he had ingredients 1, 2, 3 and 4 of the recipe.

Some people still managed to snag ingredient 4 to escape the rat race of drudgery. Lotto did it for them, like the security guard who won the P163 million jackpot. Lucky people do not need talent, will to succeed, nor hard work. Luck, like death, is a great equalizer.

I think billiards' Bata Reyes has #1, #3 and #4. Manny Pacquiao, too, but his ability is so great and the box office demand for his ability to pummel people down to the canvass is so huge that he became a billionaire in a few years. Now he is a congressman: on record his wealth surpasses the wealth of Senate President Enrile and other politicians who took decades to acquire theirs. Score one for the working man.

4:45
Back to my high school days. To give you a perspective of the value of a million pesos in the early 1970s, I will cite the microeconomics of a struggling high school student. At that time, board and lodging at the dorm of the exclusive Chiang Kai-shek College -- a bed and three meals a day -- cost only P90. That's right, less than the cost of a big Mac and fries at McDo or Jollibee, junk shops which did not exist back then. Jeepney fare was 25 centavos, fresh egg was 30 centavos, postage for regular mail 15 centavos, a Forecast bet for Jai Alai was P5, and Chess books were already expensive. I remember dreaming of the The Games of Robert J. Fischer, a hardbound edition which Popular Bookstore was selling at P90, exactly my dorm fee for a month. I can't remember how I eventually acquired that book: it's in
my library now, one of the few books from my early days to have survived.

5:09
Chess books cost more today. I remember asking my daughter in New York to buy me Series 5 of Kasparov's My Chess Predecessors. Cost me about $37, I think, and more for the shipping from there to here in QC.

Obviously, having no significant talent to exploit, I settled for less than a million to just having enough to buy the things I need in life, mostly books. After five years of a B.S. Mechanical Engineering course at UST, I went home to Angeles City. Jobless, I helped for a while at the family sari-sari store. It's a drudgery where you can find yourself just getting old and wasted in the vicious cycle of buying and selling canned goods and detergent bars. Earn money, spend your life. I shudder when I think of the epitaphs for businessmen.

"Here lies Sir Knight Juan Mercado. Sold 2,000,000 cans Ligo Sardines, 50,000 cases Ajax detergent bars. He got rich but forgot to live." Mourned by doddering Knights of Columbus and the jolly good fellows of the local Rotary and Chamber of Commerce.

5:16
Is there a shortcut to wealth at all? Lotto, of course. And politics, drug dealing, jueteng operations, cornering the telecommunications, water and electricity monopoly and other big crimes.

But does it make you happy, all that wealth? I don't think so.

Since it will take another long insomnia to blog out the reasons why with great wealth comes great responsibility and misery, I'll just provide the simple one-way test to determine if you are happy at any time in your life.

Just ask yourself, "Am I happy now?" The only right answer is an immediate "Yes." Any other answer means "No." If you try to rationalize, you are in a state of denial.

Isn't life fun? Only if you know how to play.

I admire Kasparov, and Anatoly Karpov, Alex Alekhine and Capablanca even if I dont know how most of them looked like when I was playing chess during my childhood days arond 7 ys old. although I know by heart that Capablanca can play against a bunch of witty players blindfolded
a great stunt in his days
now, playing against grandmasters is not a dream anymore, you can play against any good player with a good ranking. online without having to leave the comforts of your space.