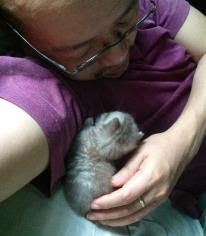 Silver, British Shorthair, and Pogi with no hair

If you enter our bedroom, tiny Silver with her thin legs will stand up and emerge from her niche, then walk, lurch, stumble, stagger, fall on her belly with a small "plop," get up again, till she reaches your feet, friendly, trusting, undemanding, affectionate. And she will be perfectly happy if you offer her milk or boiled chicken if she is hungry. If you observe for a while, you will notice that this tiny but resolute survivor can easily fit into my palm, just a fragile pulse of life which I hope hope hope will grow strong, and play, and live beyond kittenhood.

Silver is too small for her age, three going on four weeks, born to Shorthair mom Ruby, a day after Persian Mau's new baby, still unnamed, arrived with three other siblings. The other day, Leena was trying on some appropriate name for the bigger Persian baby, talking to the newcomer: "Big boy ka 'no, di tulad ni Silver linggit." I interjected, "Why not call him Big Boy then." That should have settled it, but when I told Melay of the nomination, she exclaimed, "Ano?! Babae din siya." We are now thinking of giving Big Girl the name Oggy, after the blue cat of the Cartoon Channel. We will decide if the name is suitably androgynous to fit. 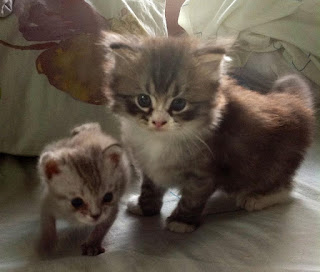 To differentiate between Silver and the-one-who-must-still-be-named-correctly, Melay for the while calls the latter "Dams," short for Damulag, to emphasize the contrast in size between her wards. We don't know why Silver has not developed to full size, why her short tail is bent (Leena says Silver is "bobtailed"), and whether she can outgrow her frailty, but I'm definite she belongs with us. She is family.

Here's the family record: Starting about 7 p.m. of 2012 July 28, Persian Mau started giving birth. The first child died of birth defect, second to emerge was "Dams," the third was stillborn, and the fourth lived for two days and succumbed to another genetic abnormality. In cases like these we deflect the thoughts of so many deaths and focus on the blessing of the one who lived. Three for the Rainbow Bridge (located under our mango tree) and one for our hearts. So far. 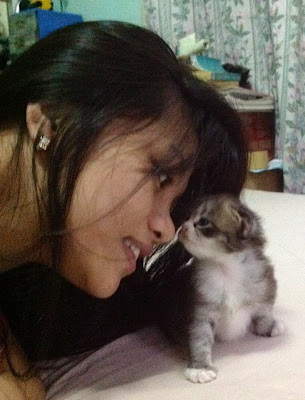 The following day, at about 7 p.m., Shorthair Ruby gave birth to wee Silver in another room. The vet, Leena, and Melay kept vigil for the next arrivals, but it became obvious by early next morning that Silver is destined to be an only child. We did not know then that Silver, like the famous Steve Jobs, will be transferred for adoption a few hours after her birth.

However, it's not that the father and Ruby sent her off: Silver lacks a newborn's instinct that often can be fatal -- she cannot smell the life-giving milk in her mother's breast. When Leena saw that she could not find and feed on the milk and natural vitamins that nourish breastfed children to health and growth, she took the hungry kitten to Mau in our room. Mau, the loving mom even for kittens not her own,  licked the new arrival and added her to her diminished brood. Still, Silver cannot breastfeed from wetnurse and surrogate mother Mau, so Leena and Melay took turns feeding her by baby bottle every two hours for some sleep-deprived weeks. It takes a lot of love and patience.

So it has been to this day: late night up to noon, Leena answers to Silvers shrill quest for sustenance and companionship. When Leena goes to the office, Melay takes over until Leena returns. We noticed that when no one is in the room, Silver does not cry out even when hungry. 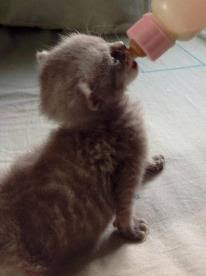 There's this stoic attitude among cats that I deeply admire; they do not gripe, they ignore their disabilities and adjust to what is left of their capability. So, Silver with her spindly hind leg -- her bent tail which lack the proper function to balance her movements -- still struggles through all the strenuous process to approach and greet anyone who enters her sanctuary.

Another survivor who has joined our family is Ding, a pusakal (pusang kalye) picked up two weeks ago by Neneng at the height of Habagat, the non-typhoon which was almost as destructive as Ondoy. Ding, then a thin, wet and hungry creature was shivering in the guardhouse at the entrance to our street. Neneng saw him and decided to bring him home, where he was dried off and fed. By the manner he devoured his food, Ding apparently was at the point of starvation, shown by the the ribs sticking out of his frail body. Today he seems to have filled out; at night he nestles on Neneng's neck for warmth and blissful sleep. 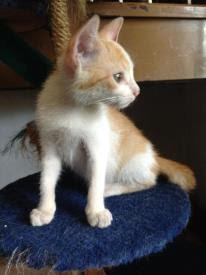 I don't know if cats have a concept of courage, of fortitude, but their forbearance is admirable, even inspiring. The ancient Egyptians had the correct appreciation of cats, which were even deified in the times of the pharaohs. When I think of pets, my mind seeks out part of a poem in Walt Whitman's "Leaves of Grass":

I think I could turn and live with animals,
They are so placid and self -contained;
I stand and look at them long and long.
They do not sweat and whine about their condition;
They do not lie awake in the dark and weep for their sins;
They do not make me sick discussing their duty to God;
Not one is dissatisfied -- not one is demented with the mania of owning things;
Not one kneels to another, nor his kind that lived thousands of years ago;
Not one is responsible or industrious over the whole earth.

Note:  It has been verified today, 2012 August 27, that "Big Boy" is a girl. So we gave her a name which we think will meet her approval -- Christine Grey, or Tintin. It's apt: she has 50 shades of lovable traits.

Silver is stronger now (January 2013) and will be six months old on the 29th. Here's a recent photo I posted in Facebook: 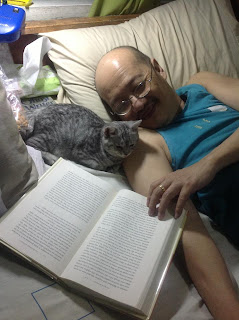 Silver reading Rushdie with me

I love your blog post. Nothing inspires the heart more than a little helpless kitten braving each day for survival. You're right, cats ignore their disabilities and focus on what good is left to them. Such positivity!

Thank you, cammiebear, your appreciation give me courage to keep writing. I have stopped for some time now. Again, thanks for the kind words. Not only cats need a pat on the head every now and then. :)