Shalala in the Morning 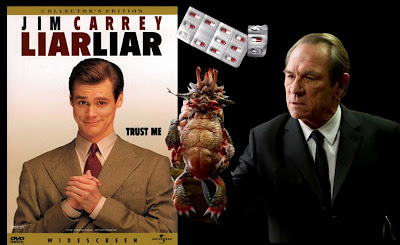 My insomnia seems to be a bit off this morning, but then again I remember Leena remarking as she turned off the nightlight: "Wow! It's already 12:12." She watched to the end Mr. Popper's Penguins. I, too, like Jim Carrey films, my favorite being Liar, Liar.

4:02
I can't remember when exactly I became aware that someone is not telling me the truth, and the reason for the lie. For smarter persons, that moment is an early awakening to the realities of how this planet works, and they easily adapt and adjust their way of life and thinking. Smart people get rich early in life.

4:11
It took decades of being pummeled by lies and half-truths before I even wondered why most of us accommodates the inexact: the misinformation, the ignorance, the lack of fact. I almost said "the lack of faith," and I remember reading somewhere that "Just because someone is willing to die for his belief does not mean he is right."

My old and sleepless mind can't grasp who first expressed that observation, which shook me some from my dumbness. It might have been Voltaire, but the sentiment seems modern, more in the line of Oscar Wilde. Whatever.

That statement is a revelation, in this age of terabyte programming and smart TV. But I have already observed that our technology is light-years ahead of our morality or life-values.

4:48
Back in 1998 Erap became  president. That would indirectly affect my position at People's Tonight. First, Joe Burgos, a veteran newsman I admired since the early 1980s, was persuaded to come out of retirement to become CEO of Philippine Journalists Incorporated, which owned People's Tonight,People's Journal, Taliba, Women's Journal, and the defunct and discredited money-losing broadsheet,Time Journal. When Burgos and his retinue of veterans arrived, he apportioned them to each publications, giving respect and precedence to the original personnel. At Tonight, associate editor Franklin Cabaluna was promoted to Executive Editor, a jump of two ranks and payscale. I was propelled from my supervisory post of copy editor to Managing Editor, ascending three ranks up with corresponding payscale, which enabled me to amass loads and loads of stamps and books.

5:12
After a few weeks, when Burgos and his appointees were settled in, I was summoned to his office. He asked me what task I performed when I was copy editor. I told him I edited and did the layouts for the two op-ed pages, including the editorial, written every day by the publisher. I also edited and did the layout for story I chose for the back page, and some minor stories for the other minor pages. That's a lot of work and responsibilities for a minor position; he saw that. It was my first conversation with a newsman I admired. I'm sure I could learn a lot from him, and I did, about fairness, integrity, and honesty -- which Erap did not possess.

"Can you," he said, "write a mock editorial about our anti-smut drive and submit it in our meeting tomorrow? Of course it will not be actually used." The test of ability has come, and my future role will be determined by the quality of my writing.

Next day before the 3 o'clock editors' meeting I gave him my assignment, my opinion about lurid films and tabloids that featured nude photos, thus outselling our publications by a huge margin.

5:41
My mock editorial about smut films and tabloids pointed out that Man has made giant leaps in technology since the time he discovered fire and made the wheel, leading to spacecraft that sent our species to the moon, and voyagers that went through and beyond our solar system, beaming back clear and colored images of giant Jupiter, a giant multi-layered orange marble with its huge stormy eye; of beautiful Saturn floating inside its rings; of big blue Neptune, its axis inexplicably tilted out of alignment, and hazy pluto which distance kept shrouded in mystery, exuding inexact information about its vague and lonely isolation.

The point is, for every step Man took forward, he took two steps back. For example, when printing was developed about 3000 BC, on cloth in Europe and India, on paper in China, tracts about religion were disseminated. That seems ok, but then sexual tales with erotic images followed. Same thing happened in painting, photography and sculpture; then, with new technologies like Betamax, VHS on to CDs and DVDs, our culture was inundated with X-rated movies. Every quality and mordant film was matched by thousands of lurid ones. Man is light-years ahead in technology, but in morals and ethics, he's just one step away from the cave.

We are primordial creatures. I sincerely hope we are not the best species the universe can provide.